PrivCo 50 takes a look at the fastest-growing startups in the U.S. and ranks them based on their performance in a given period. To generate this report for the second quarter of 2021, we looked at the data from PrivCo and evaluated startups by their employee and revenue growth as well as funding raised in Q2 between April 1 to June 30, 2021.

What you can learn from this report:

In December 2020, we released our first report for the whole of 2020 looking at the top-performing companies during the pandemic. In 2021, we are boosting our research capabilities by going even deeper and looking at the activity quarterly.

While the first of 2021 saw a continued abundance of pandemic-spurred businesses thriving, it is notable that industries funded have shifted from immediate needs such as grocery delivery, to industries anticipated to grow post-pandemic such as SaaS enterprise solutions, cybersecurity, marketing automation, artificial intelligence, and biotechnology-focused startups.

The billionaires’ race to space was focal of Q2, trickling into Q3 as billionaires Richard Branson and Jeff Bezo’s aerospace companies successfully completed their space rocket flights in July. The buzzword ‘space tourism’ is expected to continue in Q3.

While the war between Apple and Epic Games started in 2020, the ensuing battle has smaller startups pleading for change and relief from Apple’s iron grip on the mobile economy. The battle was won by EPIC, with Apple winning the war.

IPO: 177 companies IPOed in Q2 and 577 in the first half of 2021, in comparison to 480 IPOs in all of 2020. Notable IPOs in Q2 include Israel-based Monday.com who debuted on the stock market with a $6.8BN valuation and is the highest valued startup born out of the country. Others include Sweden-based Oatly at a $10BN valuation, cybersecurity firm SentinelOne with an $8.9BN valuation, and Jessica Alba-backed baby products company The Honest Company that was valued at $1.44BN on its IPO date. The most controversial IPO of this quarter goes to Didi Chuxing who hit the US stock market at a $70BN+ valuation, only to be cracked down by the Chinese government on alleged cybersecurity issues.

Squarespace was listed on the NYSE in May, choosing a direct listing over an IPO. SPAC: Q2 was a relatively sluggish quarter for the number of SPACs due to fear of greater regulation and less-than-impressive post-deal stock performances, but still boasted an impressive roster of companies that went public. Bill Gates-backed biotech company Ginkgo Bioworks announced its merger with Soaring Eagle Acquisition Corp for $1.7BN (valued at $17BN). Spare change investment company Acorn announced its plans to go public via SPAC in May for a value of $2.2BN. Another fintech startup, digital banking service Dave also announced its merger intentions with VPC Impact Acquisition Holdings, set to be valued at $4BN. 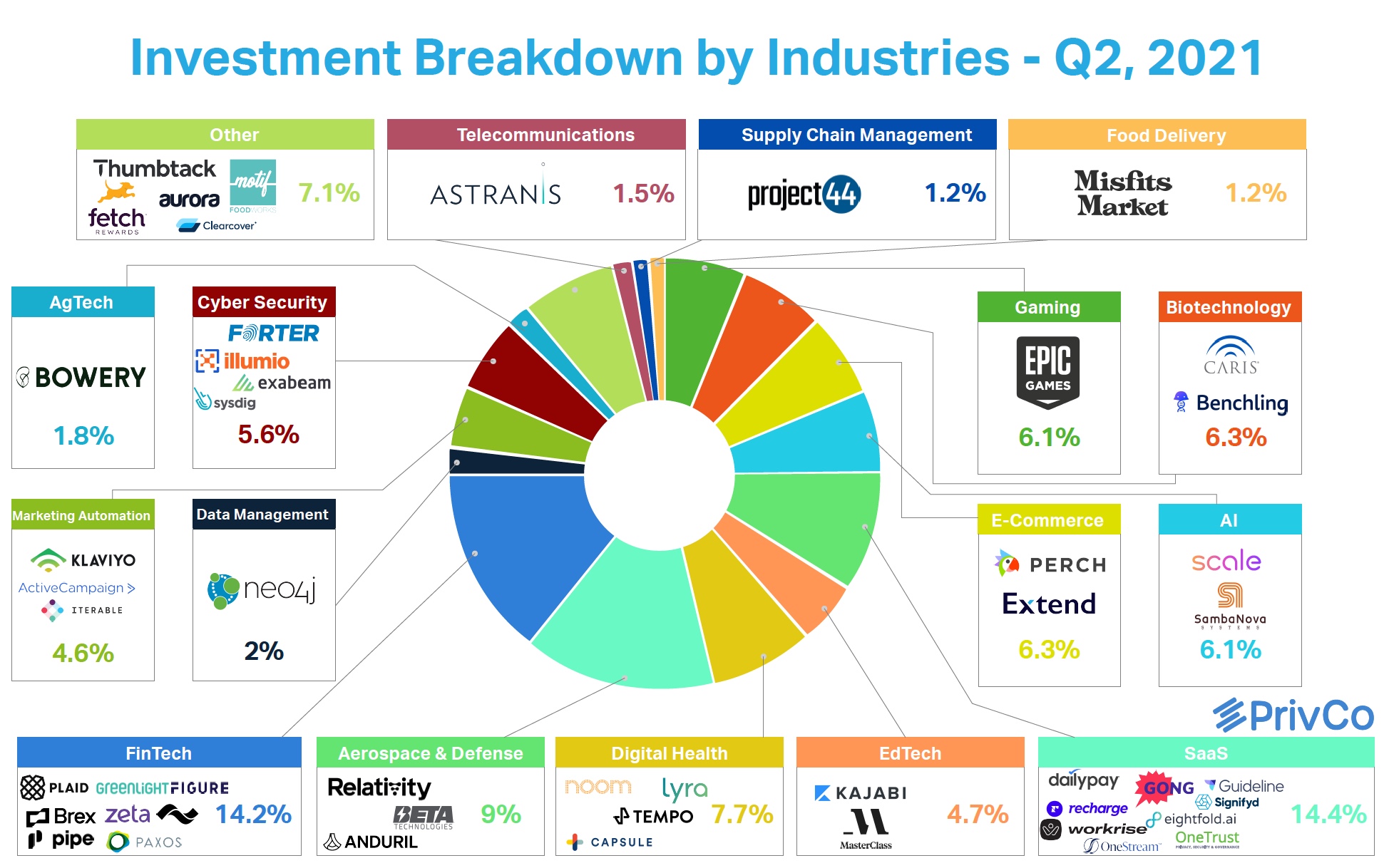 Epic Games’ giant round of funding in Q2 is a case in point of how gaming has become one of the fastest-growing industry. Top-level growth indicators include Roblox’s successful IPO in March, giant increases in demand for a Playstation 5 and Nintendo Switch consoles, and over 150+ gaming startups raising funds in the last 6 months. There are no hints of the gaming industry slowing down. MarketsandMarkets predicts the global gaming industry is set for a CAGR of 12% between 2020 and 2025.

Amongst the different types of gaming, these three forms of gaming—VR, social gaming, and Esports—are on the top of our to-watch list. For example, VR has become more mainstream thanks to devices like Facebook’s Oculus Quest, and is expected to grow at a CAGR of 32.75%. Social gaming took a huge boost from the pandemic with over 50% of gamers mentioning they have spent more time playing games during COVID-19. Lastly, even with live sports returning in 2021, esports is thriving as they diversify their ways of engaging with the audience from incorporating traditional sports leagues into their games, to changing their format to become more league-based, or even positioning themselves as lifestyle brands.

Fintech growth shows no sign of stopping. From a small (but mighty) three-company list in 2020, the number of companies exhibiting growth has jumped threefold this quarter. Fintech startups that continue to break traditional banking standards and rules are gaining traction. For example, startups that offer no-frills access to digital banking capabilities like neobanks Brex, Paxos, and Current may not completely dismantle the megabanks of corporate America, but it doesn’t mean they aren’t attracting many new customers, and with thier popular low to zero fees banking they are at least forcing traditional financial institutions to change their ways. On the other side of the spectrum, startups like Plaid and Zeta Services are offering their tech stack to power financial institutions’ journey to digitization or enhance their capabilities even further. Plaid, for example, was named in the 2021 CNBC Disruptor 50 list for the first time as a result of its ability to help other leading financial services like Coinbase, Robinhood, and more sync with traditional banking institutions. Plaid also made its round of headlines last year after the Department of Justice block the deal for credit card company Visa to buy the company. Financial literacy is another trend that is growing in 2021 and becoming increasingly important as families are eager to start early in teaching their children how to spend wisely. Greenlight Card, a company that guides parents to teach their children how to save using its app and debit card products, is a leader in this space. The growing movement of decentralization and blockchain ledgers has also fueled the growth of companies like Figure Technologies, which offers equity mortgage refinances, and student and personal loans on its blockchain. With the transparency of public ledgers, blockchain capabilities no longer revolve around the trendier NFTs and bitcoins, but are increasingly translating into other real-world financial solutions for an average person.

While commercial aerospace had a terrible 2020 and still faces many uncertainties in 2021, this industry as a whole is driven by the potential of space exploration, militarization, as well as air mobility advancements. With the successful flights into space by both Richard Branson’s Virgin Galactic and Jeff Bezos’ Blue Origin, it can be expected that more spotlight will be placed on space exploration and rockets development, namely with companies like Relativity Space. EVOTL (electric vertical takeoff and landing aircraft) is expected to soar to $1.5TR globally by 2040, and companies like BETA Technologies are in the race to see who can go to market first. Many of its competitors are going public via SPAC, but with recent scrutiny on this method of going public, it is still hard to tell who will be a clear leader in air mobility. Finally in the area of defense, with growing pressures from China and Russia who have been focusing on strengthening their military capabilities in space, companies like Anduril Industries are trying to stay ahead of the game by working directly with the US government and its allies.

Without a doubt, 2020 was a great year for SaaS companies. They were able to help solve the digital transformation problem for many enterprises, as offices shut down and employees were forced to work from home. Global spending on enterprise software recorded $426BN in 2020 as enterprises compressed their digital adoption plans from years into weeks. Even as the world has steadily opened up, enterprise solutions remain a high-growth industry each quarter as digital tools and solutions have become a standard. Top ranking DailyPay’s growth is a signal of the times as many Americans continue to struggle financially and require services like DailyPay to receive their paycheck immediately. In a recent survey conducted by LendingClub, 54% of Americans across a wide range of income and age, are living paycheck-to-paycheck. Take a deeper dive into our Top Enterprise Software Company of 2021 report here to take a further look at trends in this space.

2021 continues to be a record year for funding in terms of money raised per round, although Q2 has dropped slightly from Q1, down 23% on average funding per round. While deal counts in comparison to 2020 have dropped, funding raised in comparison to the previous year grew almost 35%. On average, companies that raised money in Q2 of 2021 are doubling their funding.

This report is current as of the initial date of publication in Aug 2021 and may be changed by PrivCo at any time. The companies profiled are focused on the U.S. market of privately-owned companies based on their performance including funding rounds, employee, and revenue growth until June 30, 2021.

This report is intended for general guidance only. It is not intended to be a substitute for detailed research or the exercise of professional judgment. PrivCo shall not be responsible for any loss whatsoever sustained by any organization or person who relies on this publication. The data used in this report may be derived from third-party sources and PrivCo does not independently verify, validate or audit such data. The results from the use of such data are provided on an “as is” basis and PrivCo makes no representations or warranties, express or implied.

PrivCo’s dataset is constantly expanding and as data is added to the platform over time, some of the numbers in this report may shift at the time of viewing in comparison to the platform. A company may not have founders listed, or the data may not be updated on PrivCo’s company profile yet.