A recent poll showed that Twitter users are flocking from the social media app infamously under new management. Ever since Elon Musk grabbed the helm of the app, users, and many, many employees, have been leaving the app in droves.

A new era in social media

We appear to be entering a radical shift in social media's history. Meta has laid off thousands as huge investments in the metaverse haven't quite panned out. Twitter is on the brink of extinction as key employees pack their bags and take their infrastructure knowledge with them.

The Atlantic smugly proclaims, "The Age of Social Media is Ending – It should have never begun." And celebrities from Whoopi Goldberg to Gigi Hadid are taking their clever jokes and online spats elsewhere.

But where are they going? For insight into how users have mounted and dismounted from social media, it's helpful to look at the historical precedent. Luckily, researchers have been following engaged online users from LiveJournal in the early 2000s to Tumblr in the 2010s to discover what makes a migration effective. One point that stands out is an effective alternative.

Cue Mastodon, the closest rival to Twitter's format and the enviable winner of mass migration from Twitter. 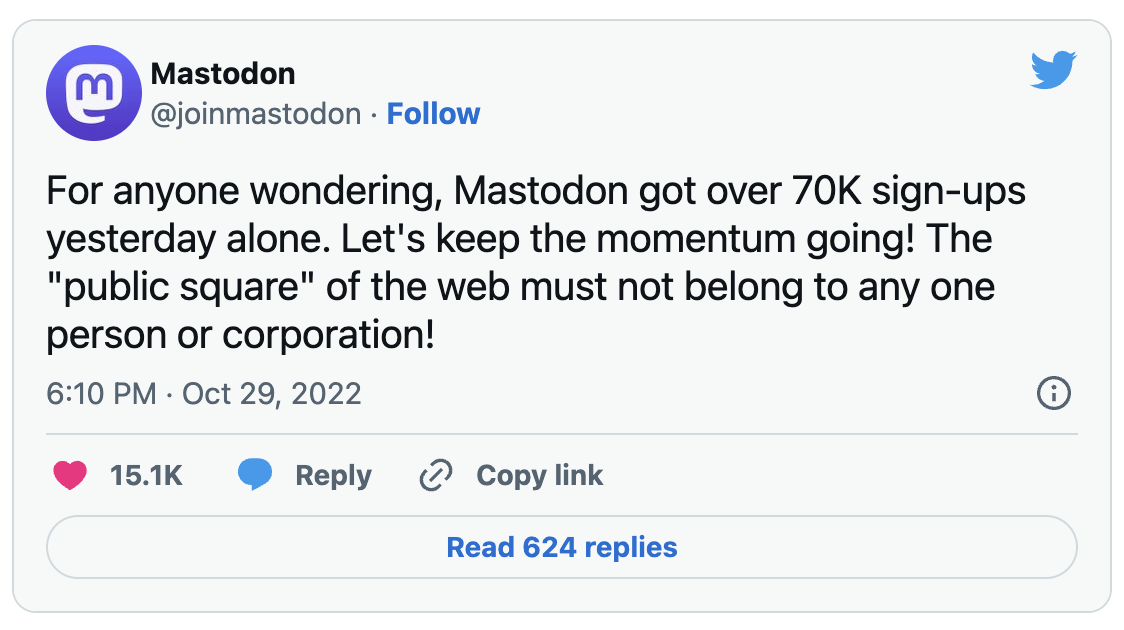 Their home screen proudly proclaims that it's "social networking that's not for sale." They are a free, open-source German non-profit supported by users. Testimonials applaud the app's ability to provide real opportunities for connection and emphasis on privacy and safety.

Discord is the fan favorite amongst the chronically online. It started with gamers and has now grown to include communities or crypto enthusiasts, entrepreneurs, and even book clubs.

Tumblr is aiming to recapture some of the 100 million users it had at it's height of popularity in 2014. The company has seen dwindling revenues since but is poised to earn more with Twitter users looking for the "alternative" alternative.

Hive Social, a latecomer with a sudden surge of new users, is trying to draw swarms of new users to their updated social network. They're brand new with only 3 employees and a $300K crowdfunded round that closed last week.