Minority-led companies were the most hurt by the pandemic in 2020, seeing 26% less money raised compared to 2019. However, the average capital raised per company was the highest amongst all the groups researched, signaling that investors who did invest were more open to larger sum investments in each company.

What you can learn from this report:

Historically, women-founded or women-led organizations, as well as organizations led by minority groups receive less funding than companies founded or run by white men. Although society is continually shifting and awareness of the gaping differences and challenges for business-owners of underrepresented groups is rising, we take a closer look at how the COVID-19 pandemic has caused a decline for almost all minority groups despite the Black Lives Matter movement and subsequent pledges by many enterprises to support more diversity. Through this report and also the continuous improvements of its private market intelligence platform, PrivCo aims to spotlight underrepresented companies in the private market.

In this report, we compare funding and concentration of the funding by location and verticals, as well as spotlight companies to watch, grouping the companies tagged on PrivCo under minority-led, women-led, and women-founded. Women-led refers to companies with people publicly identifying as a female and part of the C-suite of the organization. Women-founded refers to companies with people who identify as female and are founders of the organization. Lastly, minority refers to people who are identified as non-white.

2020 was a monumental year for recognizing diversity and inclusion. The deaths of Ahmaud Arbery, Breonna Taylor, George Floyd, and others lit a spark for many to bring once uncomfortable conversations of racial injustice to the dinner table, offices, and board meetings. This in turn has had a huge impact on how companies and governments react to advancing diversity, equity, and inclusion. Like the #MeToo movement in 2017, society as a whole are more eager to embrace and put diversity first when thinking about hiring and investing. While some companies may have rushed to implement some form of inclusion efforts into their company, in 2021, companies that don’t implement any inclusion efforts will be facing many challenges especially in acquiring talent and business. 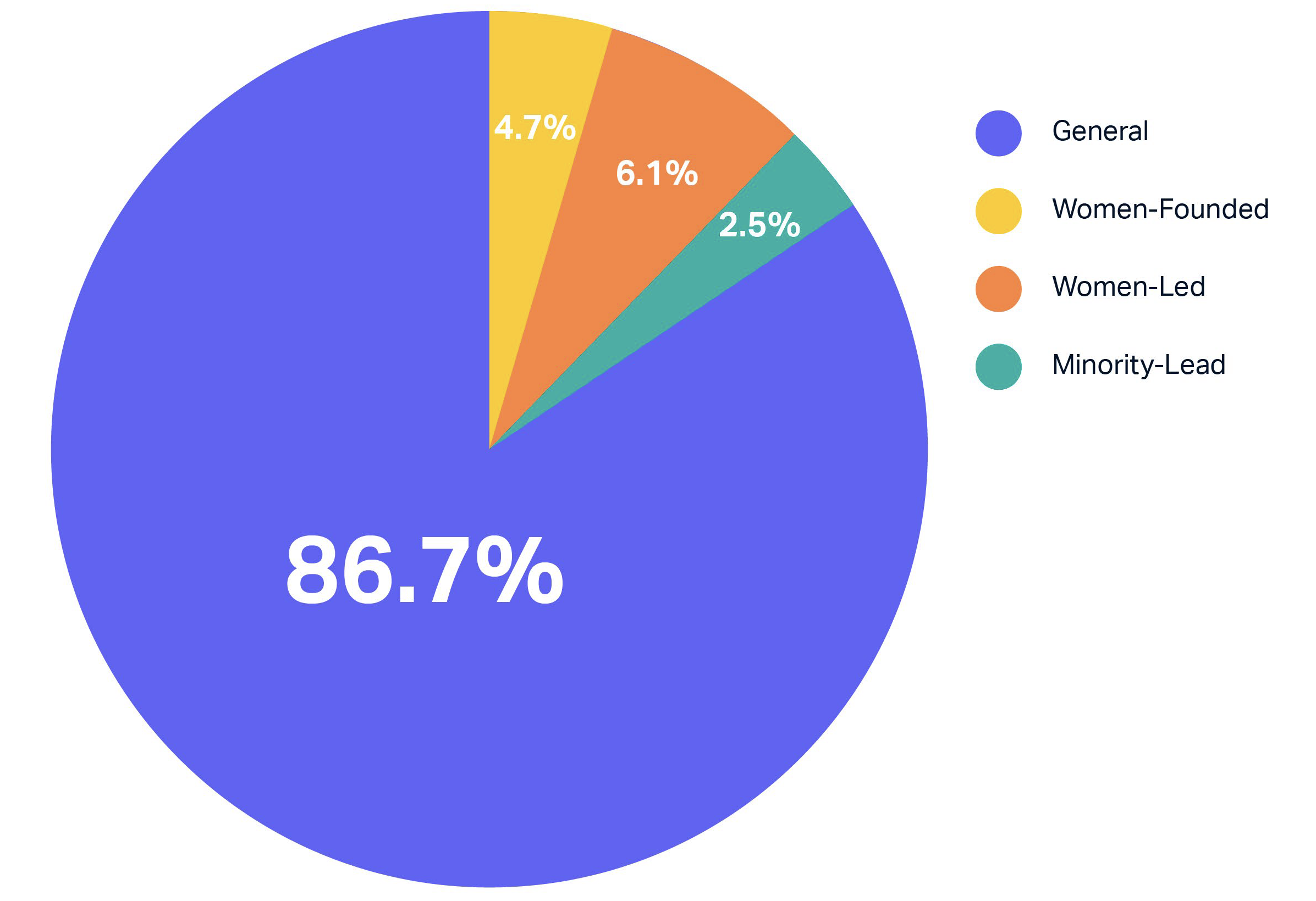 Note: There is a slight % overlap of companies matching multiple tags, for example, women-found and women-led.

Minority-led companies were amongst the group most impacted by the pandemic. Although 2019 funding only represented 2.3% of the total funding raised in the same year by all companies, this dropped to 1.2% in 2020, or just $1.8BN. To put it into perspective, the total funding raised by minority-led companies is equal to Quibi alone, the failed content startup that shuttered in the same period and lost $1.75BN of capital raised.

Not surprisingly, the number of companies who raised capital in 2020 also decreased by 80% but those who did, on average, raised $10MM more. This is $2.9MM more than the overall funding average per company, showing that while less companies raised funds, those that did gained the confidence of their investors.

Breaking Down the Data Minority-led companies raised money were concentrated in the following verticals:

In the public world, all S&P 500 companies now have at least one woman on the board, and according to executive search firm Spencer Stuart of the 432 new independent directors added to S&P 500 boards, 59% were women and minority men. California took a step further to increase female leadership by enforcing a bill that requires public companies headquartered in California to name at least one female director by the end of 2019. Still, women leaders are rare. Of the 560+ IPOed companies in the past 12 months, only three were women-founded and only 8 had a female CEO.

In addition, according to a study by Mercer, women minorities continue to be underrepresented: 81% of women in executive roles are white compared to 6% who are Black, 3% who are Hispanic, and 8% who are Asian or Pacific Islander.

What About the Private World?

Breaking Down the Data

Women-led companies raised money were concentrated in the following verticals:

Women-founded companies raised money were concentrated in the following verticals: The data contained in this report comes directly from PrivCo and is based on data and calculations from the PrivCo database at the time of writing in February 2021. The data is focused on the U.S. market of privately-owned companies based on their performance including funding in the 2019 and 2020 calendar year.

PrivCo’s dataset is constantly expanding and as data is added to the platform over time, some of the numbers in this report may shift at the time of viewing in comparison to the platform. A company may not have founders listed, or the data may not be updated on PrivCo’s company profile yet.

If you notice missing data or want to request updates, please reach out to research@privco.com.